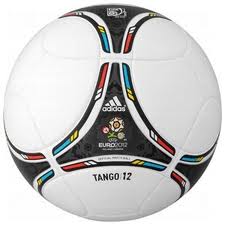 I'm not alone in thinking the first tournament I blogged about was shit. Some might even say my World Cup 2010 blog was shit, but let's move on. Fact is, the football was poor and people were quick to blame the ball.
But Alan Shearer raised a good point tonight. Not one player has complained about this tournament's sphere and the quality of the football has been outstandingly high.
Lesson learned, surely. UEFA don't tinkle with their balls and preside over a great tournament. FIFA fiddled with their balls and came up with something that stunk.
Posted by Jon Lymon at 8:36 pm

If you think this silver thing is some ornate vase, best move on.

WHERE IT ALL STARTED...

PURCHASE THIS NOVEL FOR NEXT TO NOTHING